Today is the birthday of Roald Dahl.

Roald Dahl, who was born on this date in 1916 in Wales, is of course best-known for his children’s books.  Following is a partial list of his best known titles for youngsters–chances are you’ve read some of these:

He is less known for the stories he wrote for adults in collections such as Kiss Kiss (1959) and Switch, Bitch (1974). These stories are decidedly more mature than his children’s work, and often involve diabolical villains and wicked twist endings.  He also adapted a few of them for “Alfred Hitchcock Presents,” the most famous of which was “Lamb to the Slaughter,” which tells the story of a woman who kills her husband with a frozen leg of lamb and then serves the evidence to the homicide detectives.
Junior high literature books are stuffed full of stories about characters overcoming obstacles and demonstrating bravery in the face of adversity.  Read enough of those, and you’ll want to puke.  That’s why I used to love teaching Dahl to my eighth graders, who were titillated by Dahl’s almost-PG-13 stories of gambling, murder, and revenge.
If you’d like to try out of these stories, a good place to start is with “The Man From the South,” which was also made into an episode of “Alfred Hitchcock Presents.”

(The above citation is a great book my wife picked up in England and includes heaps of interesting facts about Dahl’s life.  Dahl fans and teachers of Dahl’s work should check it out.) 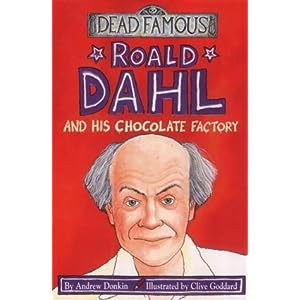