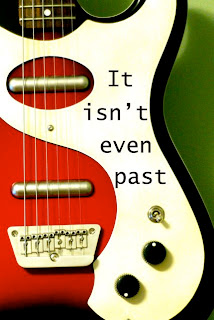 Life makes more sense with pop  music.
Life makes more sense with pop music.  That’s why I’ve gone back, year by year, and chronicled the song that meant the most to me then.  This song may not have been released that year, it may not have been big that year, but it was relevant to me in a personal way that defines that period of my life.
Also, I didn’t do too much research to make sure I got these years right.  This is my life, after all, and if I confuse 1998 with 1999, well, that’s my right.
2007: “I Love This Bar” by Toby Keith
Look, we’re all snobs.  If you don’t think you are a snob about music, you’re either not much of a music fan, or you’re lying.  We all have prejudices against certains bands, performers, and entire genres.  I can’t stand the Grateful Dead or Pink Floyd.  Zydeco makes me crazy.  And if when I hear auto-tune, I want to auto-puke.
It’s easy to look down your nose at music you don’t like, and nothing invites self-righteous scorn more so than the glitzy, over-produced pop that is streaming out of Nashville.
We live two hundred miles away from Nashville, but we don’t go up there too often.  When we do, it’s usually for work or to see a Titans game or a band play at the Ryman.  In 2007, Renee and I made the three-hour drive up to Nashville to meet my brother Jason and his wife, Julie.  We all had a few days without any obligations, so we were going to hang out, visit some bars, and try to find some good music if we could.
We weren’t having any luck.  We tried Broadway, but it was a sweaty, touristy mess.  Robert’s Western World was a nightmare.  We ended up driving around the Vanderbilt campus until we found something that suited us better.
The next night we tried one part of town, then another.  We were going to give up for the evening until my brother suggested we find The Station Inn, out on 12th avenue.  It was hard to find, the parking was bad, and there was a $10 cover, but we went in anyway.   Harley Allen was playing.
Allen is a skinny guy, fifty years old, with grey hair.  He’s written songs for  Garth Brooks, Ricky Skaggs, George Jones, Del McCoury, and Alan Jackson.  That night, he played some of his songs solo, with just an acoustic guitar.  Later, he had a blugrass band back him up. We sat in the audience and sipped our beers, and were beguiled by his charm and talent.
He writes country songs for Nashville, so the themes that one might expect are there.  He write about tractors, patriotism, self-sacrifice, distrust of the rich, and pride in a sort of blue-collar life that exists only in the made-up world of country music.  But his songs were incredible, and he had every one in that bar—suddenly my favorite bar in the world—listening in rapt silence.  He played “Awful, Beautiful Life.“
In the middle of his set, he invited a friend of his named Scotty Emerick to the stage.  Emerick, like Allen, writes for the big names in Nashville.  He played this song, “I Love This Bar.”
“I Love This Bar” is a fine song. Cast aside Toby Keith’s clownishness and the bizarre video that accompanies it and you’ll find something that’s not all that different from “I’ve Been Waitng” by Matthew Sweet or “Unsatisfied” by the Replacements.  Emerick is an artist, and his song is meticulously crafted and ultimately true.  This is the kind of song that makes you grateful for stumbling into an unfamiliar club in a city you don’t know all that well with the dearest people in your life.  It’s the kind of song you are proud to call your own.